What are security principals?

The following diagram illustrates the Windows authorization and access control process. In the diagram, the subject (a process that’s initiated by a user) attempts to access an object, such as a shared folder. The information in the user’s access token is compared to the access control entries (ACEs) in the object’s security descriptor, and the access decision is made. The SIDs of security principals are used in the user’s access token and in the ACEs in the object’s security descriptor. 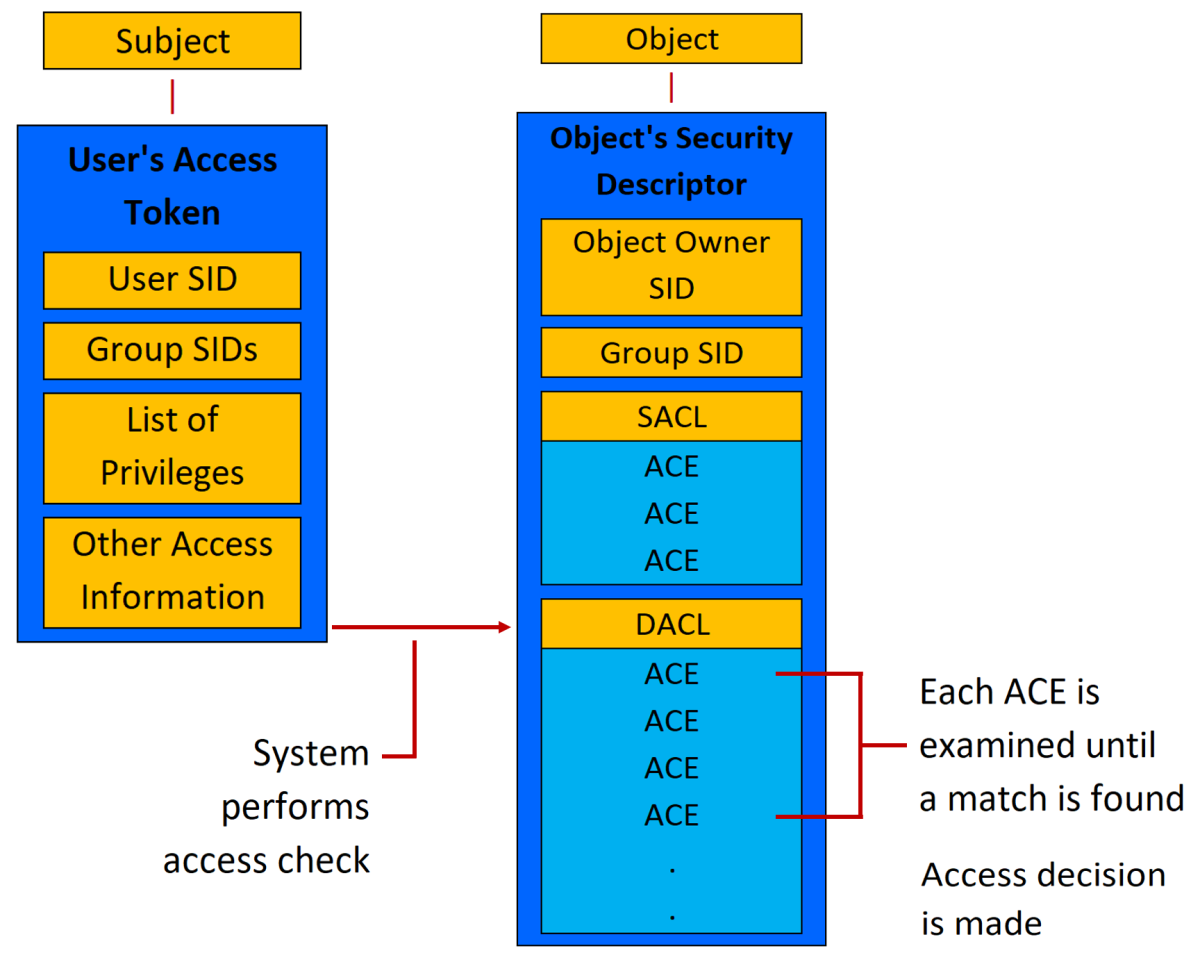 Security principals are closely related to the following components and technologies:

Security identifiers (SIDs) provide a fundamental building block of the Windows security model. They work with specific components of the authorization and access control technologies in the security infrastructure of the Windows Server operating systems. This helps protect access to network resources and provides a more secure computing environment. A SID is a value of variable length that’s used to uniquely identify a security principal that represents any entity that can be authenticated by the system. These entities include a user account, a computer account, or a thread or process that runs in the security context of a user or computer account. Each security principal is automatically assigned a SID when it’s created. The SID is stored in a security database. When a SID is used as the unique identifier for a user or group, it can never be used to identify another user or group. Each time a user signs in, the system creates an access token for that user. The access token contains the user’s SID, user rights, and the SIDs for groups that the user belongs to. This token provides the security context for whatever actions the user performs on that computer. In addition to the uniquely created, domain-specific SIDs that are assigned to specific users and groups, there are well-known SIDs that identify generic groups and generic users. For example, the Everyone and World SIDs identify groups that include all users. Well-known SIDs have values that remain constant across all operating systems.

An access token is a protected object that contains information about the identity and user rights that are associated with a user account. When a user signs in interactively or tries to make a network connection to a computer running Windows, the sign-in process authenticates the user’s credentials. If authentication is successful, the process returns a SID for the user and a list of SIDs for the user’s security groups. The Local Security Authority (LSA) on the computer uses this information to create an access token (in this case, the primary access token). This includes the SIDs that are returned by the sign-in process and a list of user rights that are assigned by the local security policy to the user and to the user’s security groups. After the LSA creates the primary access token, a copy of the access token is attached to every thread and process that executes on the user’s behalf. Whenever a thread or process interacts with a securable object or tries to perform a system task that requires user rights, the operating system checks the access token that’s associated with the thread to determine the level of authorization. There are two kinds of access tokens, primary and impersonation. Every process has a primary token that describes the security context of the user account that’s associated with the process. A primary access token is typically assigned to a process to represent the default security information for that process. Impersonation tokens, on the other hand, are used for client and server scenarios. Impersonation tokens enable a thread to run in a security context that differs from the security context of the process that owns the thread.

A security descriptor is a data structure that’s associated with each securable object. All objects in Active Directory and all securable objects on a local computer or on the network have security descriptors to help control access to the objects. Security descriptors include information about who owns an object, who can access it and in what way, and what types of access are audited. Security descriptors contain the access control list (ACL) of an object, which includes all the security permissions that apply to that object. An object’s security descriptor can contain two types of ACLs: You can use this access control model to individually secure objects and attributes such as files and folders, Active Directory objects, registry keys, printers, devices, ports, services, processes, and threads. Because of this individual control, you can adjust the security of objects to meet the needs of your organization, delegate authority over objects or attributes, and create custom objects or attributes that require unique security protections to be defined.

Permissions enable the owner of each securable object, such as a file, Active Directory object, or registry key, to control who can perform an operation or a set of operations on the object or object property. Permissions are expressed in the security architecture as ACEs. Because access to an object is at the discretion of the object’s owner, the type of access control that’s used in Windows is called discretionary access control. Permissions are different from user rights in that permissions are attached to objects, and user rights apply to user accounts. Administrators can assign user rights to groups or users. These rights authorize users to perform specific actions, such as signing in to a system interactively or backing up files and directories. On computers, user rights enable administrators to control who has the authority to perform operations that affect an entire computer, rather than a particular object. Administrators assign user rights to individual users or groups as part of the security settings for the computer. Although user rights can be managed centrally through Group Policy, they are applied locally. Users can (and usually do) have different user rights on different computers. For information about which user rights are available and how they can be implemented, see User Rights Assignment.

A user account enables a user to sign in to computers, networks, and domains with an identity that can be authenticated by the computer, network, or domain. In Windows, any user, service, group, or computer that can initiate action is a security principal. Security principals have accounts, which can be local to a computer or domain-based. For example, domain-joined Windows client computers can participate in a network domain by communicating with a domain controller, even when no user is signed in. To initiate communications, the computer must have an active account in the domain. Before accepting communications from the computer, the Local Security Authority on the domain controller authenticates the computer’s identity and then defines the computer’s security context just as it would for a user’s security principal. This security context defines the identity and capabilities of a user or service on a particular computer, or of a user, service, group or computer on a network. For example, it defines the resources (such as a file share or printer) that can be accessed and the actions (such as Read, Write, or Modify) that can be performed by a user, service, or computer on that resource. The security context of a user or computer can vary from one computer to another, such as when a user authenticates to a server or a workstation other than the user’s primary workstation. It can also vary from one session to another, such as when an administrator modifies the user’s rights and permissions. In addition, the security context is different when a user or computer is operating on a standalone basis, in a mixed network domain, or as part of an Active Directory domain.

A user account uniquely identifies a person who is using a computer system. The account signals the system to enforce the appropriate authorization to allow or deny that user access to resources. User accounts can be created in Active Directory and on local computers, and administrators use them to: Windows and the Windows Server operating systems have built-in user accounts, or you can create user accounts to meet the requirements of your organization.

A security group is a collection of user accounts, computer accounts, and other groups of accounts that can be managed as a single unit from a security perspective. In Windows operating systems, there are several built-in security groups that are preconfigured with the appropriate rights and permissions for performing specific tasks. Additionally, you can (and usually will) create a security group for each unique combination of security requirements that applies to multiple users in your organization. Groups can be Active Directory-based or local to a particular computer: By using security groups to manage access control, you can:   Source & Reference – Windows Server Security Principals
Share on Facebook Share on Twitter What are the Best Practices for Secure Active Directory

Hit enter to search or ESC to close